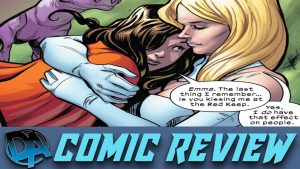 Normally I record a video review talking about all the books I’ve ready in a particular week. This past week the day I was set to record I got some really bad news in my family, but I still wanted to share my thoughts on the books. So I have the platform right here, lets do it!

Before we get started I just wanted to say again; this will not be a norm and the Dark Avenger channel will be moving full steam ahead moving forward. Lets get into the books!

A good issue, I feel like this Sin-Eater arc will lead into Green Goblin’s return. I’m not really a fan of this arc, but with Norman Osbourn involved I actually have a peeked interest in seeing where this is all leading to. Once again kindred is pushed to the back so that different stories can be told, I just wish we could get Kindred over with so we could move past it already at this point.

Batman teaming up with Batwoman in a take to save Lucius was brilliant. Joker of course still has the upper hand in all this, but we all know Batman will find a way. I just hope this all doesn’t lead into Bruce revealing himself as Batman. I know there’s not even an indication of it, I just worry since Bendis’ reveal of Superman’s identity to the world. Is anyone still ready any Superman books? I’m just curious how all his big changes are turning out because they pushed me out of the books. Punchline’s character I’m rapidly losing interest in, I don’t know why, I feel like we got over hyped about her then covid hit and now its been months and that hypes kinda died down a bit.

I LOVED this issue so much. Jesse Quick, Max Mercury and Impulse all back in the Flash Part of the U. Barry’s fighting back and the remnants of Flashpoint are finally being erased. I just hope erasing the mistakes of one reboot don’t set the DCU up for another. I love how Barts the one that saw through Zoom and knew something was off as Barry continues to try and fight back Zooms possession. I’m really looking forward to where all of this goes in the end.

I missed this series a lot. It’s kitty’s funeral! Lockheed makes it back to Krakoa and reveals to Emma who killed Kitty and she begs Professor Xavior to try one more time to bring Kitty back. This time they figure out why she failed to come back the other failed times, she tried to phase instead of break through and with Emma’s help is finally able to. Here’s the thing FIRST she couldn’t get through Krakoa’s portals, which meant she couldn’t be brought back by Krakoa because for some reason there was a problem with her. Now it’s just because she was trying to phase, so truly no mutants right now can die, all of them got the infinite life cheat. This and the annoying chart/map/graph/written doc pages are really starting to lose me with X-men. However the story has me interested. Hickman is not making his easy for me to like or not like. I guess we’ll see where this goes, still interested in seeing how they get back at Shaw.

Krakoa nation versus Russian Nest dolls. Collosus still is struggling with the decision he made with Domino and you can see it as well as how he feels about Krakoa. However he does return to help in the fight. We also learn that Quinton and a cuckoo are actually secretly dating, in Cable you can see this coming from a mile away since they all are playing him for a fool anyway. So all this was just to get the Cerebro sword (yes there apparently is a Cerebro sword), poor Quenton again. I guess we’ll see where this goes. Again PLEASE stop with the carts and documents it’s easy to skip but then I think what a waste of a good comic page. I also feel bad all of the X-books are intertwined, they feel safe enough to read on their own but still all feel a bit too connected in a “should I be reading this book too” kinda way.

Daisy may have a new boyfriend…ish, kinda. I’m not sure but the followers of the red mother are watching on really closely. Wouldn’t it be a twist if the boyfriend is involved with it all too. Work seems to be getting rough for her as she gets deeper into the puzzle, wonder what the end game for that will be as well. It all ends with the demons return….mmm Daisy better be careful. Love this book every time a new issue comes out

SUPERMAN we finally find out what’s been going on with him in this dark Bat universe. Of course he’s saved and we get even more heroes saved that have been locked away as this event started. Flashes race against the batman that laughs or the bat-shadow whatever he’s called now. Wonder Woman truly is taking a strong lead and I KNOW this was what was suppose to lead into the new “soft reboot” of the DCU yet again (G5), I truly hope it doesn’t happen but it’s looking more and more like the rumor of it still moving forward may have some fact to it as a story from G5 is showing up in a future DC book. Sigh I really wish DC would learn STOP REBOOTING even if it’s just the past STOP! We don’t need it at this point just tell us good stories. DC’s already in enough trouble, the fans are trying to tell you what we want, your not listening.

This was a brilliant first issue. We get introduced to the keepers and holders. I love how they are not allowed to fall in love or have kids…yet 2 of them do. Whats crazier is they choose to give up their baby to continue to be keeper and holder. There’s a break in and they separate so that holder could get away. I had a feeling one would die, and next issue we get introduced to their child. I wont spoil any more of the book read this, you will be very happy you did. Hats off to Tom Taylor and crew, this was a solid first issue!

I loved this issue, Darth Vader is going so strong this time around. Still in search of answers about who hid his son from him, we get more flash backs more moments from Naboo. Just when you think Vader has realized he’s done enough he continues forward. Still no one knowing Anakin is Darth Vader. Truly if anything in character Darth Vader is NOTHING like Anakin so they are essentially two separate entities. This was an excellent read this week, cant wait for more!