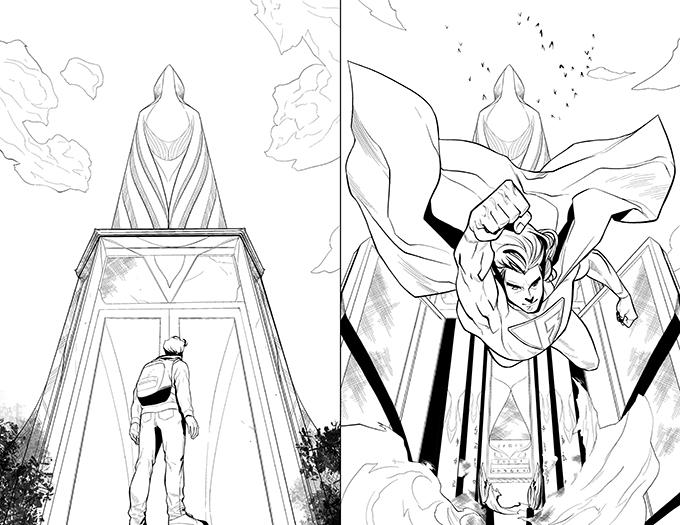 I’ve been eagerly waiting for the time to finally come. If you’re subscribed to the newsletter (Shooting Star Presses), I’ve been sharing art as we received it for both internal pages and special covers. This week there will be another newsletter going out talking about the Kickstarter and what will be going on throughout the month we are live. I’ve honestly just been bursting with ideas so I wanted to share what you all will be seeing during this campaign.

I do want to mention first the videos and streams I do on a weekly bases. The comic review will be put on pause until after the Kickstarter is over, I will be sharing my thoughts/reviews of comics for CBW (Comic Book Weekly) on Comic Frontline every Tuesday. Speaking of that, I still will be on CBW every week, Dark Avenger Gaming streams should be for the most part still happening as well. I wont be working on a schedule for Twitch until after the Kickstarter though. Most anticipated will still be going on each and every week on DarkAvengerC86 and I have several What The Card videos slated all the way into late September so there will be content there as well. So what IS going to be happening well lets get into that! 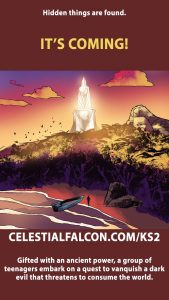 I’m planning on doing several streams/shows throughout the whole month of the campaign. Most of the streams will be multi-streamed on my Facebook, DarkAvengerC86, and my vlogging channel. One thing I learned during last year’s Kickstarter was I didn’t do enough Facebook live streams so I’m going to be setting up a camera and we’re going to go live a lot more. Of course most of the time I’ll be promoting and talking about the Kickstarter/Celestial Falcon, but these will also be social streams. I really do hope you all come by, say hi, and we can chat a while.

I’m also hoping to combine these with my gaming streams on twitch and we can have a month celebration to celebrate Celestial Falcon back on Kickstarter. One of the things I loved most was doing IRL streams during the last Kickstarter this time we’re going to do even more. 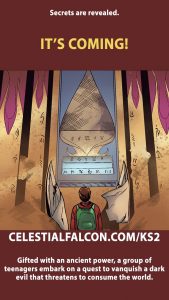 THIS… this I’m MOST excited to bring to all of you. For this issue, I have SEVERAL written pieces I will be doing during and even after the Kickstarter. I’m saving detail on what I’ll be writing for the newsletter (subscribe today, it will be out later this week). However these written pieces will be answering questions I was asked before on the previous campaign that I could not answer fully until now. I’ll also go into a few details behind the scenes with this issue, and the making/remaking of this issue and part of the story. One thing I will confirm cause I made my mind up today about this; there will be a short story connected to the Shark (during or post Campaign, still debating on the when), I do also have a planned post on sharks in general I will be making very early on during the campaign. 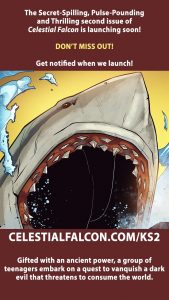 Brant and I are both open to doing any show or podcast talking about Celestial Falcon #2. I’m hoping to revisit with old friends that interviewed us for issue one. I’m hoping to find a way to reach out to even more people this time around! So if you have a show, reach out to Brant and/or myself. we would love to get the word out about this book to as many people as we can! 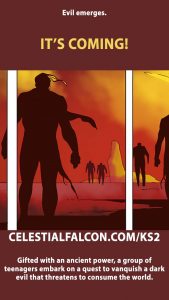 This time around I’m really hoping to do this better as well. Share more posts on the Kickstarter page, we definitely will be doing at least a show or two on the main Kickstarter page itself. Brant is very good at working Kickstarter, I’m still learning but I’m hoping to be way more interactive this time on the page. I will be sharing all the posts I do on here as well as streams and live shows as much as I can. Also, Brant and I will be of course sending updates to everyone that pledges or follows the campaign.

This is the book I waited so long to talk about. I’ve stayed silent since issue one about all of this, the posters say it all. Secrets are revealed, hidden things are found, evil emerges, and so much more all wrapped into this second issue of the series. The only way you will find out the true secrets, experience all the action, and see the true reveal about who Chris really is will be to get your hands on this issue! Come join us on this journey and experience the beginning, the TRUE beginning and if you think the action starts in this issue…ooooh it’s just getting started! I hope your all ready, this is going to be an insane ride.

Written in the Stars