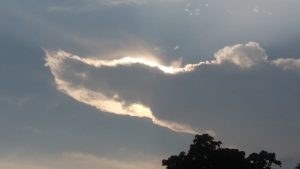 This is the story of a man. A man who had a very unique life. He grew up on a farm when he was a young child. Then one day he moved to a different country when he was a little bit older to start a new life with his parents and siblings. He would have two families of his own, when he got older. The first would end due to a lot of bad things happening. The second would be for the rest of his life. The one constant in the mans life was his wife, her mother, and his sons. The youngest which was very close to him but needed extra care/attention, and the eldest who disliked but loved him and was more independent. He did have other children from his first family, but that is another story lost in the trials of time. This family would have a very unique dynamic, one that would weather many hard times, sad times, but also many happy times.

He would have many precious moments with his family. Life for this family would seem pretty normal for a very-very long time. The story of those times is not for this story to tell either, so we move forward. His sons are both men now. The eldest starting a family of his own, and the youngest starting a new relationship. While most were content, the mans eldest son always wanted for a big family. He went so far as to try and reach out to his half siblings from the mans first family. The one flaw of the eldest son was his heart sometimes blindly made decisions without truly listening to anything or anyone else. This is why the eldest dealt with the most heart break and disappointment growing up. The man however was happy because he was able to catch up on lost times with his older children.

Unfortunately “normal” could only last so long for the man. He started to get sick. He was sick before but this time everyone felt it was something different…something more. The man had cancer, one of the few kinds that has no true cure. This time there was no getting better, just slowing down the spread. The man would fight, he would take the medicines and treatments. He would also ignore certain things, like quitting the things that would only make the disease spread faster. Maybe it was naivety  or maybe he believed he would get better. Slowly he would get weaker, it would be harder to walk, his back would start to hurt making walking even harder.

While the man was slowly getting sicker, drama would start to unfold. First a family member started to forget things, it started off very slight at first and then got worse as time moved on. Another would move in and say way past her welcome and take advantage of the kindness of the family pushing the man to do more than he should in his condition. The youngest would get into his own set of drama which he cause involving his girlfriend, which only started to cause the schism of the family grow wider. The eldest too would make decisions that would only come back to haunt him in the near future, again doing certain things without thinking and using his brain. The man witness as everything he had for so long, the family he raised and grew so close to start to break apart.

Finally a day came where the youngest would do something the man never expected especially from his youngest. The event was anything but typical, feelings were hurt all around. Things truly would never be the same again. The man slowly started to give up, holidays would come in, but for him would pass by just as fast because now he was sleeping more than ever. Hardly able to walk or do anything the man slowly started to fade. The eldest son the one that disliked him most now the only one constantly by his side with his wife. The youngest, the one he expected by his side, not nearly as close. The man couldn’t understand why his youngest would do what he did at such a time, but he would not say anything to him because he didn’t want to lose what time he had left with any of his children. He would however be angry and upset at certain people involved in the situation with his youngest.

The last few weeks of his life the man would open up like he never did before to his wife and his eldest son. His eldest son now seeing the side his father was unable to show before his dislike for his father slowly changed as he finally saw the true side the man never showed. The eldest’s mother always tried to explain but he wouldn’t believe…now he finally saw it. Many stories would be shared, many close moments that the three of them would remember for the rest of their lives. The man one night said “I’m dying” to his wife and eldest and the eldest would say “your going to be ok” knowing deep down in his heart the truth. This would be the point that truly broke the eldest. He had experienced loss before as a child but this was a constant in his life since he was born.

Then one night, it all happened so fast. The youngest was there very upset, the wife scared knowing this could be the moment she never wanted to happen, the eldest not knowing what to truly think. The man would be brought to the hospital and they would do all they could. The man would fall asleep one last time. When he woke up he would see his parents standing over him. His mother in a warm welcoming voice telling him “its time to go son”. The man not fully realizing what is happening would be in shock seeing his parent who had passed on many many years ago. Finally he would realize what was going on and say “I can’t go, my family still needs me”. The mother replies “your heart slowly has given up, and your lungs have stopped working”. The man would plead “please give me just a little more time”. The father would then look at the man straight in the face and say “we did, we gave you one last holiday season with your family. You were suppose to leave months ago”. The mother would reassure “just because you are not with them in body anymore, just like us, you now will watch over them in spirit”. The man would do just that, he watched over his family as they went through what would be the toughest time in their lives at the moment.

He watched over the children of the eldest, he reached out to his wife one last time to say good bye. The youngest would have dreams…but they were just dreams nothing more. The child from the previous family, well, it is not for us to know…but they know, that is between them and the man. The eldest however had a very special gift. One that he had not used or thought of for decades. The man only now learning this after he has passed on. He learned about a lot of things he didn’t know before.

The eldest for a long time after the mans passing would have a hard time coping. Anger and sadness were emotions that would push him down in an already horrible time in the world. There were days where all he wanted to do was make them feel how he felt, hurt. He had the conversations, the words his father said to him THINGS that he was told that he could use to tell the people that hurt him most and it would destroy them. Yet deep down, he knew he couldn’t be that person. That’s not the person he is, the person he grew up to be. He could never hurt someone intentionally. So instead he did what he always would as the eldest he chose to protect them all instead and make sure they never found out. Once again he took the weight of it all and put it on his shoulders. The eldest was still mad, he was still very sad, but he just wanted to get past it all and move on without having thoughts from the near past in his mind.

That is when the eldest gifts came back to him. He was at the point finally where he could not deal with being down anymore. That is when his abilities took hold to help him, the man was able to reach out one last time. “We just were finally getting along…why, why did it have to happen then” the man could only say “it was my time, nothing anyone could have done”. A few other words would pass and the man would remind the eldest of his gifts and abilities. Then as quick as it began, it was over. The eldest knew he needed to move forward, he was a father himself now. The son became the father, and he knew they depended on him just like he did on the man when he was a child. There were things he took from those times, things he’d do the same, and several things he’d do different.

However one last question remained in the eldest’s head; “where do I go from here” and the man said as loud as he could praying his eldest would hear “write son, write”. The eldest paused as if he heard or maybe he felt something…and then he remembered the promise he made to his father. “I promised him I would never stop writing…so that’s exactly what I’ll do”. Keyboard in hand the eldest began to write, his story now only truly…beginning.

THIS was a story! The purpose of it is to inspire, make you think, maybe help heal, or entertain the reader. This is a written work of mine and bares NO reflection directly on anyone or anything in my personal life. However if there is something in here you do take to heart, maybe it’s something to think about and reflect on. One point I wanted to make with this story is, life is only so long…live, love, experience, enjoy, and love the people you share it with because you never know when it’s over. We never want it to be over, we always want “just a little more time”, sometimes we get it…sometimes we don’t. CHERISH every moment you have now! Tomorrow is a worry for later, yesterday is a memory, today is what is most important…live it.

“Make your life…spectacular. I know I did” -Robin Williams

The Life of A Father Updates

Why I Brought the Review Back